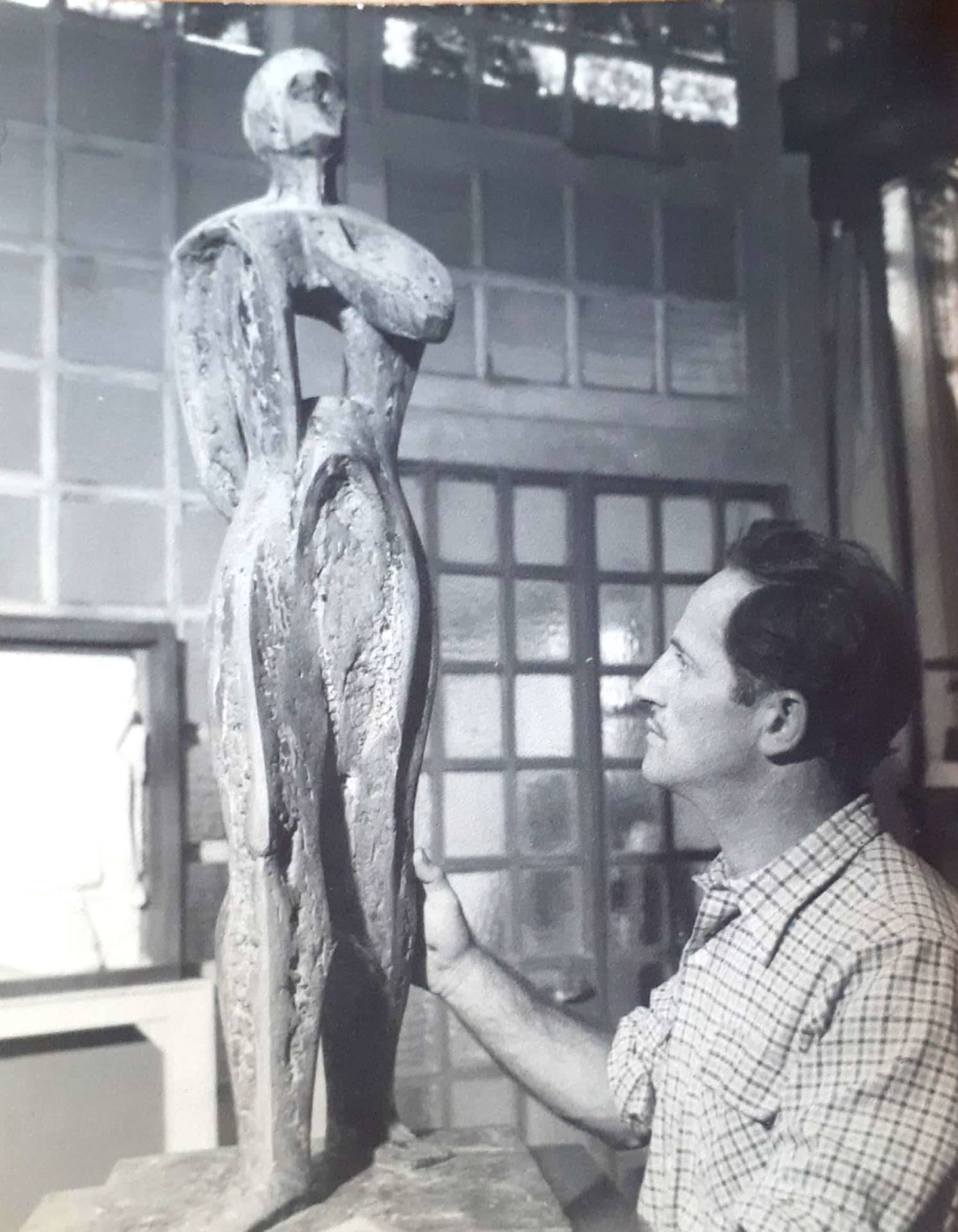 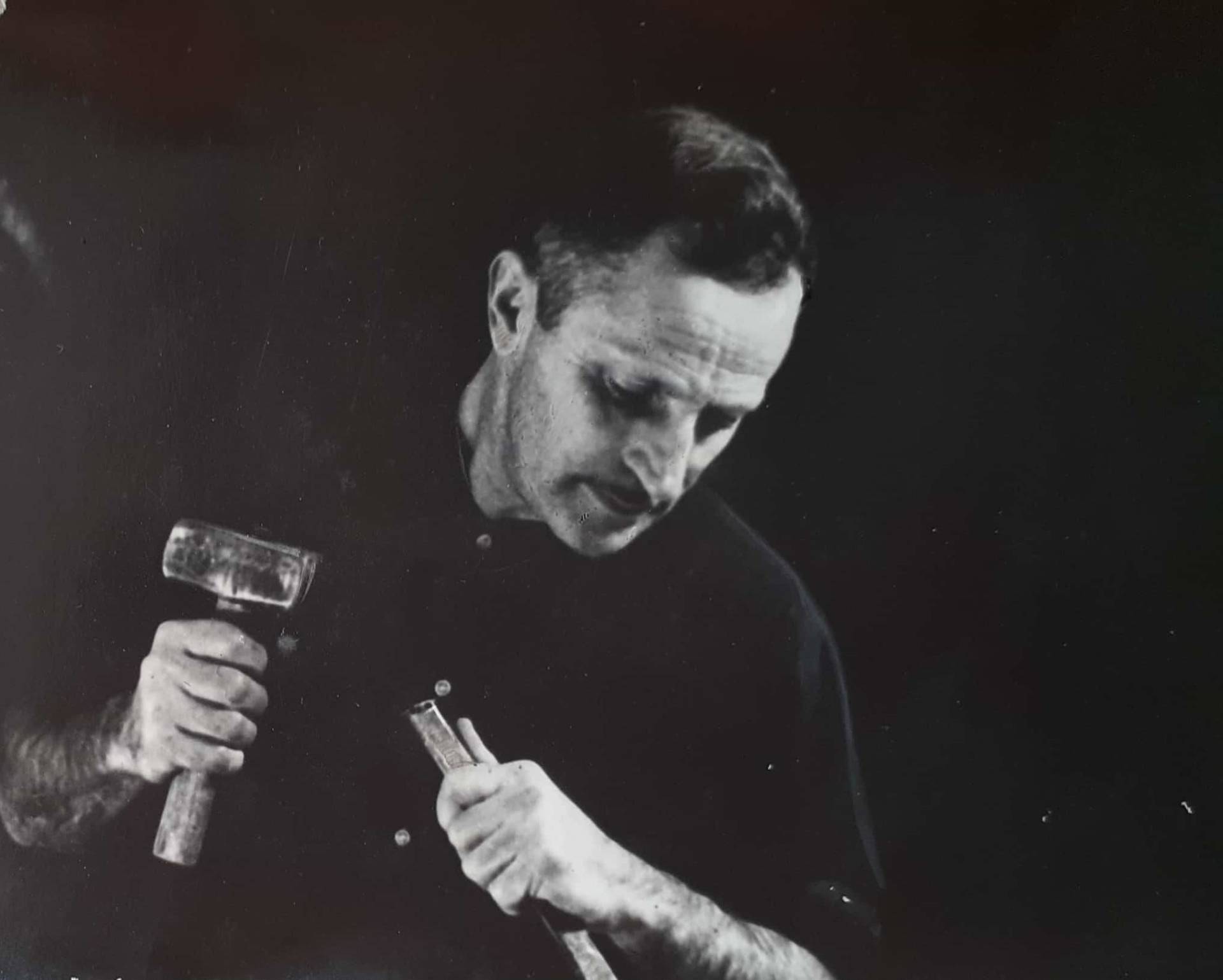 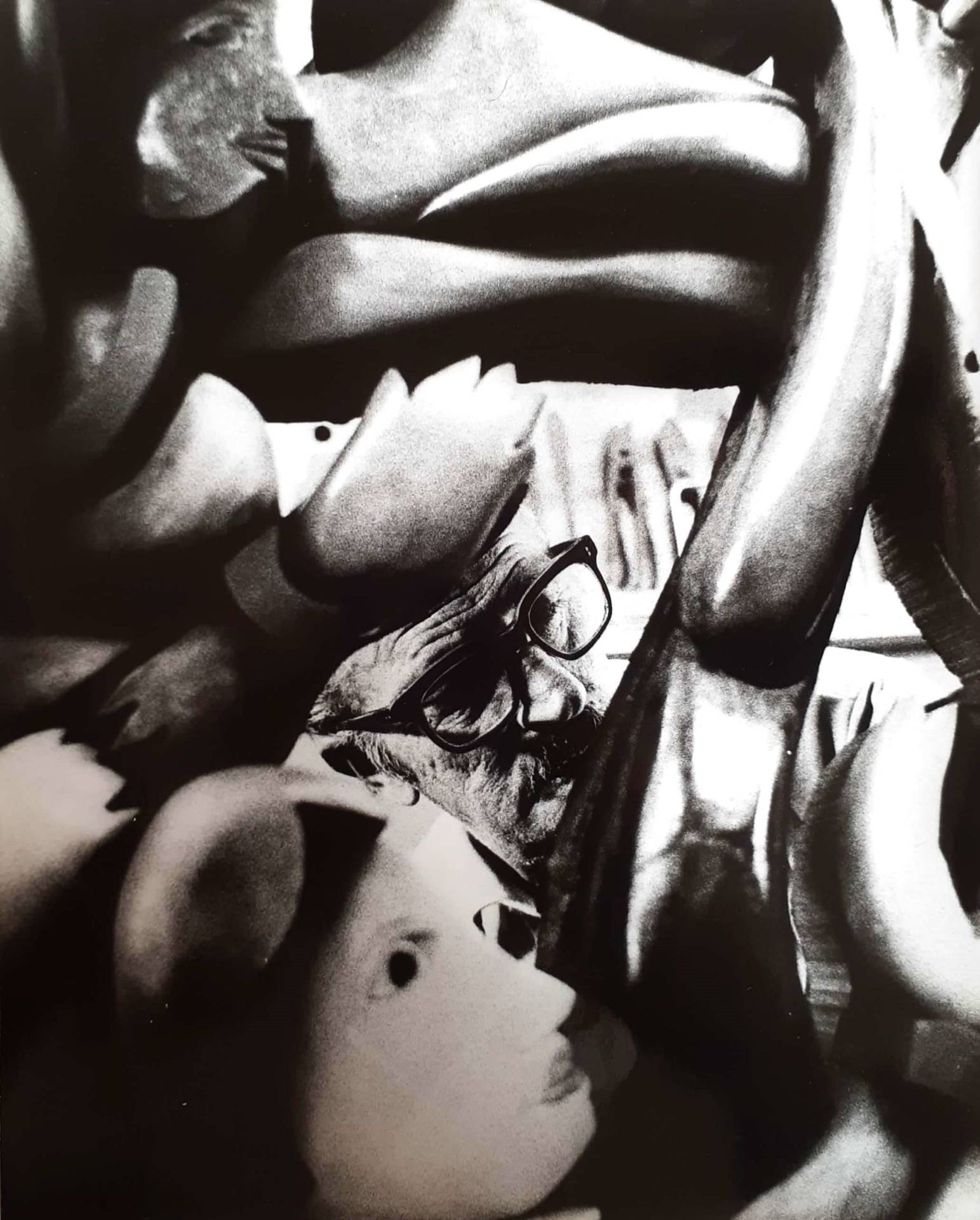 From art and crafts. Naum Knop an artist in training

Naum Knop was born in the city of Buenos Aires in 1917. His family, of Russian origin, comes from Ukraine and they settle in the Buenos Aires neighborhood of La Paternal, where his father has his carpentry workshop. In this space, among woods, saws and nails, the young artist grows and is formed. It is there that he first came into contact with wood carving, a technique that he learned to capitalize on in his later production. Interested in art, when he finished elementary school, he continued training with the teacher Luis Fernández, working for many years in furniture design. According to the artist:

In the 1930s everything was fine because Chippendale furniture was used, but when the sleek futurists came, the job was done. It was when I enrolled in the National School of Fine Arts. Until today I have been a craftsman, I thought, so now my path as an artist begins. ¹

Thus, in 1935 he began his studies at the Manuel Belgrano School of Fine Arts, which at that time was directed by Pío Collivadino. After obtaining the title of professor of drawing, between 1941 and 1942, he took the Alberto Lagos and Alfredo Bigatti graduate course at the National School of Fine Arts; and when he finished, he attended the Ernesto de la Cárcova High School where he trained with Soto Avedaño, Carlos de la Cárcova and José Fioravanti. The latter introduces him to stone and marble carving.

The works that are conserved of this period are scarce; however, sources and photographs of the time show a production of studio pieces highlighted by the interplay between massive volumes and the surrounding space. These works dialogue with the production of contemporary creators such as Libero Badii and Aurelio Macchi. Knop also begins to work on themes that later acquire a great development in his production, such as the sculptures entitled Familia and Fusión.

The study trip abroad was one of the unavoidable steps for Latin American artists. With various itineraries – generally European – the creators sought to complete their academic training but also to approach modern trends. In 1947 Knop decided to broaden his horizons and, after his years of training at the local level, set out on his first journey. In the postwar context, and with great lucidity he chose the United States as his destination. A country in full growth and transformation whose artistic field, in full swing, fostered the development of its own avant-garde art while welcoming many of the European artists exiled by the war. Knop settled in Los Angeles, California, where he entered the “Art Institute”. At the same time, it goes through museums and artistic institutions, takes an interest in William Zorach and observes the work of Wassily Kandinsky. At the beginning of the following year he exhibited at the Hall of Arts in Beverly Hills.

Continuing with his itinerary, the artist continues on the move, traveling to Chicago, New York and then heading to Europe where he toured France, Italy, Switzerland and England. This last tour puts you in contact with works by artists that will be essential to your mature production. Relentlessly, Knop emphasizes the great impact he receives when he watches the production of Henry Moore, Jean Arp, Lipchitz, Constantin Brancusi, Umberto Boccioni, Henry Laurens, and Ossip Zadkine. Artists who, throughout the 20th century, modernized sculpture through various lines of aesthetic language renewal. For Knop this link implies a strong transformation:

In the beginning, I started with realistic images. Afterwards, in art school, I discovered Henry Moore (…). Then, I wanted my sculpture to be lighter, more intricate, more complex. I open up the forms, and started using the loxt-wax process as an armature ³

Towards a mature expression

In 1949 Knop returned to Argentina. There he set up his workshop and began to work on ornamental carving. The following decade represents the beginning of their successful participation in national and municipal classrooms and awards. Around 1956 he obtained the Stimulus Award at the Salón de la Plata and the following years he received the first awards from the salons of Tandil (1957), Mar del Plata (1959), Rosario (1959), Santa Fe (1960), Rosario (1961). ), among other awards. In 1963 his work was chosen for the Grand Prize of Honor of the Manuel Belgrano Municipal Plastic Arts Hall; and a year later it reaches the highest recognition in the local sphere when it receives the Grand Prize of Honor, National Salon of Plastic Arts.

As of the sixties, it continues with the shipment and consecration in the salons, and reaches international recognition through its multiple exhibitions abroad. He performs exhibitions in Jerusalem, Rome, Tel Aviv, Dusseldorf, Los Angeles, Washington, Campinas, New York, among other countries. Each exhibition is also the opportunity to travel, receive commissions and on countless occasions, his works are acquired and become part of the Argentine collection of museums, galleries and other institutions abroad.

At this time Knop begins a deep and conscious analysis of the forms, movement and space that he expresses in various series. In these sets the human anatomy prevails: seated, reclining, running, undulating, swimming or dancing figures are some typologies that the author reiterates on different occasions. At the same time, she continues to work on issues related to motherhood and family, to which she adds new topics such as the extensive series of eyes and birds as well as other less numerous ones dedicated to musicians. All these pieces are executed in different techniques and supports. Throughout his life, Knop worked with multiple materials, experimenting with cement, reworking plaster, stone carving and marble, producing molten wax bronzes and molten wax welded, and of course, creating and experimenting with wood.

In 1970 he set up his workshop, today the Naum Knop Foundation, in the Parque Patricios neighborhood. There he installs an ideal workplace for the development of large-scale works. The space of immense proportions and sliding ceilings that offer great lighting become the scene of his production and the culminating point of a journey that begins from the entrance and that continues along a sunny path accompanied by plants, flowers, sculptures on pedestals and reliefs. on the walls. The inauguration of the new studio draws the attention of the press who dedicate several notes to it.

During 1982, he lived in Los Angeles for a year, but his concern for his country during the Malvinas War brought him back. Installed in Buenos Aires, in May 1983 he inaugurated the exhibition “Naum Knop. Murals and Sculptures ”presented at the Praxis Art Gallery. There he exhibits wooden relief murals and metal sculptures; pieces among which Mother and Son stands out, a direct reference to a painting by Lino Eneas Spilimbergo.

Throughout the decade he mainly worked with wood and especially palo santo. In this regard, the author explains:

I have worked direct carving, like any sculptor. I oriented myself towards a new sculpture composed of harmonic masses, towards the assembly technique. They are small masses that make up the whole. ⁴

On wood, I operated almost like a collage that is built by addition. There the shape stands out by overlapping, receding in space and the profiles are more abrupt and linear. ⁵

His quest to experiment, to study the different materials until he has perfected himself in each technique is not a minor issue, since Knop considered that:

The subject is not essential. What is really important is how the artist expresses himself through the subject. ⁶

Thus, he configures a multipurpose work, in which he continually re-elaborates the great themes with new solutions given by the different resources provided by the use of multiple materials. Among his main searches is his interest in achieving a communion between art and everyday life:

“The day will come when there is a greater union between architects, designers, sculptors and all beings who collaborate in an integration of the arts” ⁷

This search to integrate different artistic disciplines is evidenced in the countless works and murals that he made for private buildings and public spaces. Naum Knop sought to integrate sculpture into life, bringing it closer to our daily lives and achieving a union between art and urban life. Some of the numerous spaces intervened by the artist’s work are: Centro Cultural Recoleta, Banco Credicoop, Escuela Ort Argentina, Centro Cultural San Martín.

While working tirelessly in the realization of his works, Naum Knop died in Buenos Aires at the age of 75.